When creating app screenshots and videos, app publishers have a lot of questions. In this article, we will show you how to decide on screenshot orientation, quantity, background, color, and size. We’ll also discuss when it is worth using a video for app preview and what it should look like.

According to SplitMetrics, only 2% of users read the full app description. Optimizing screenshots gives a 21-24% conversion uplift; app video previews: 17%. Therefore, it is very important to choose screenshots and videos that will help increase the number of installs. We are going to answer the questions that most developers have when starting ASO.

This article is based on the Performante guide, where Maria Chernoplyokova shares her tips on optimizing screenshots and previews. We have updated and supplemented this guide in accordance with the latest trends and expert opinion. Read on to find out how to make your visual optimization more effective.

A 2021 ASOdesk study found that about 96% of the top apps use portrait (vertical) screenshots. But, when we look at games, the statistics vary somewhat — around 80% have vertical galleries.

One of the primary goals of screenshots is to demonstrate the superior features of your app compared to competitor apps. Portrait orientation will assist you in offering more information to your target audience. Users can see three portrait screenshots at the same time. If you opt for a landscape orientation, there will be only one screenshot per frame.

Before making a decision, conduct A/B testing of the application page with vertical and horizontal screenshots. Compare conversion rates, and then make a choice.

The optimal number of screenshots will depend on the specifics of your application. If your app has a lot of features to show, use as many screenshots as possible. If you have a simple application, you can settle on fewer screenshots. For instance, a simple calculator only needs a few screenshots to demonstrate all the main features of the app.

Be sure to always look out for the latest updates in the App Store and Google Play guidelines and use basic common sense. The screenshots — as well as your app — should not contain upsetting and offensive content. The App Store will reject any screenshots that have realistic guns in them, for example. Fantasy guns need to be in a passive position, in a holster, or worn on the back, while swords and knives must not be aimed towards the user.

How to choose a screenshot background

The 2021 report on Visual Optimization trends noted that the top 38% of free apps in the App Store and 42% in Google Play generally choose white as a background color. Bright background colors such as red, yellow, and pink are seldom used. App publishers tend to choose darker, muted shades of blue, black, or green.

However, if you have a shopping or social networking app, then you can consider using brighter background colors. Naturally, the background has to align with your brand identity and color scheme. More importantly, it mustn’t be distracting. So it is preferable to opt for a solid background.

The case is different with the gaming apps — 68% of publishers of top games on the App Store and 72% on Google Play add the game interface on the screenshot without any background. Therefore, gaming app publishers can easily stand out among the competitors by simply editing the screenshots.

Analyze your competitors and see which screenshot colors they use the most. You need to stand out among them so that your application becomes more noticeable in the search results.

To make analyzing your competitors easier, use ASOdesk. The Keyword Charts tool will show the competitors’ rankings for your keywords. This will help you determine which apps you will have to compete with for each keyword.

How to choose font and text color for app screenshots

With regard to colors and font, choose the options that work well with your brand identity. The color of the text has to contrast with the background and be legible. The text should be large and easy to read, even on a small device. 48% of the App Store publishers and 56% of Google Play publishers use white as their text color.

Create a few different options that you can test on various devices. Consistently check on the main KPIs (screenshots will influence the install rate, for example). Furthermore, don’t rely on your personal taste. Your screenshots have to be pleasant to the eye but it’s recommended that you avoid any artistic extras.

What text should be added to screenshots

Your text has to be legible and visible from the search page. The more words you include, the smaller the font will be. For example, the text on the Amazon Shopping app screenshots is difficult to read from a small device.

So, it’s preferable to place a few catchy phrases on the screenshot that contrast with the background. When it comes to screenshots, less is definitely more. You can use bold fonts to highlight the most important details or simply make key words or phrases bigger.

Add popular search queries to screenshots; this will help reassure the user that they need your application.

If you would like, you could include a screenshot with any awards and mentions your app may have. Parv Bhargava’s (ASO Consultant at Phiture) report at the App Promotion Summit noted that social proof helps gain users’ trust and affirms the authenticity of your app. By showing the number of app users in the caption, we can take advantage of this innately human characteristic and boost conversion. It is important that data on the screenshots is true, otherwise you might get sanctioned by the Google Play moderation.

By the way, you can read more about the top reports from the App Promotion Summit in this ASOdesk article.

Constantly emphasize the things that have changed in your app. If, for example, you have created a new feature or updated the app, include this on one of the first screenshots.

It’s important that the text on the screenshots is easy to read. Highlight app’s best features, social proof, and app updates.

How to create screenshots yourself

These services will help you generate screenshots without the assistance of a designer:

Screenshots Pro helps to create panoramic screenshots for iOS and Android app pages in just a few minutes. The service has pre-made templates, localization, comprehensive customization features, the option to download custom fonts, and the API to automate screenshot updates.
Canva is one of the most user-friendly services out there that can help you make vibrant images. AppLaunchpad generates screenshots right from the app.
DaVinci Apps also specializes in screenshots and offers a vast number of predesigned templates.

Lina Danilchik recommends conducting A/B tests before adding videos to your page. Experiments on SplitMetrics have revealed that videos can negatively affect your conversion rate.

Add videos only if you have sufficient content and functions within the app. Promo videos are recommended for games, photo and video editors, streaming services, online shopping, and food delivery apps.

Portrait vs. Landscape Videos — Which One Should You Use

On the App Store, your choice should depend on the orientation of the app itself. On Google Play, however, it is recommended to create the video in landscape even if the app is vertical. However, you should note that your app preview video for Google Play will be uploaded to YouTube.

Landscape videos are preferable on YouTube as they look better and more professional. Furthermore, if your video has a horizontal orientation, you can enlarge the text and it will be easier to zoom in and highlight some of the app’s features. This is simply because you have more “space” in landscape. You should always test both options and monitor the KPIs to establish which preview is performing better.

Apple recommends using QuickTime and iMovie to edit your footage.

Limit the branding elements and focus on the demonstration of the app’s features. Don’t add people interacting with the app on the video (for example, touching the screen). You can only do this when the main gaming process or the app is used outside the device. You can highlight the areas that you want the user to pay attention to.

On the App Store, every video can only be up to 30 seconds long.  Google Play recommends making videos short — only the first 30 seconds are played automatically. The preview has to appeal to the user from the first few seconds. This means you don’t have any time to spare, so put the most interesting and useful information at the beginning of the video and be creative. Your video should not include any upsetting or offensive content.

69% of users watch videos with the sound off in public places. However, 80% of viewers are more likely to watch the entire video if captions are available. So be sure to add text to your preview video. Everything should be understandable without sound.

But that does not mean that you have to neglect the narration or background music (check that there is no copyright violation). The captions must be legible and should not change too quickly — the users need enough time to read all the information.

Top tips for optimization of app screenshots and preview

Written by
Julia Suliagina
is@asodesk.com
Asodesk Content Manager. She writes newsletters and articles in blog. Make all complex topics in ASO easy and interesting.
All articles by author
Get the latest news, case studies & articles on app growth, ASO, and customer support
I agree with Terms and Conditions
Also read:
App Store Optimization
How ASO specialists should localize apps for the Korean market

Alexander Vereshchagin
avtrener@gmail.com
Alexander Vereshchagin — Head of Organic Traffic. Alexander does ASO for foreign markets — primarily for East Asia. He works daily with 10 languages and adapts ASO to different cultures. Since 2016, he has been the author of books in the publishing houses “IPIO” and “Exmo”.
All articles by author
14 min read

How ASO specialists should localize apps for the Korean market

South Korea ranks fourth in terms of developers' revenue, behind only China, the United States, and Japan. So, entering the Korean market can become a good point of growth and help increase the revenue for app publishers. In this article, we will explain how to localize an app’s text metadata into Korean and what important things to consider in the process. Read more 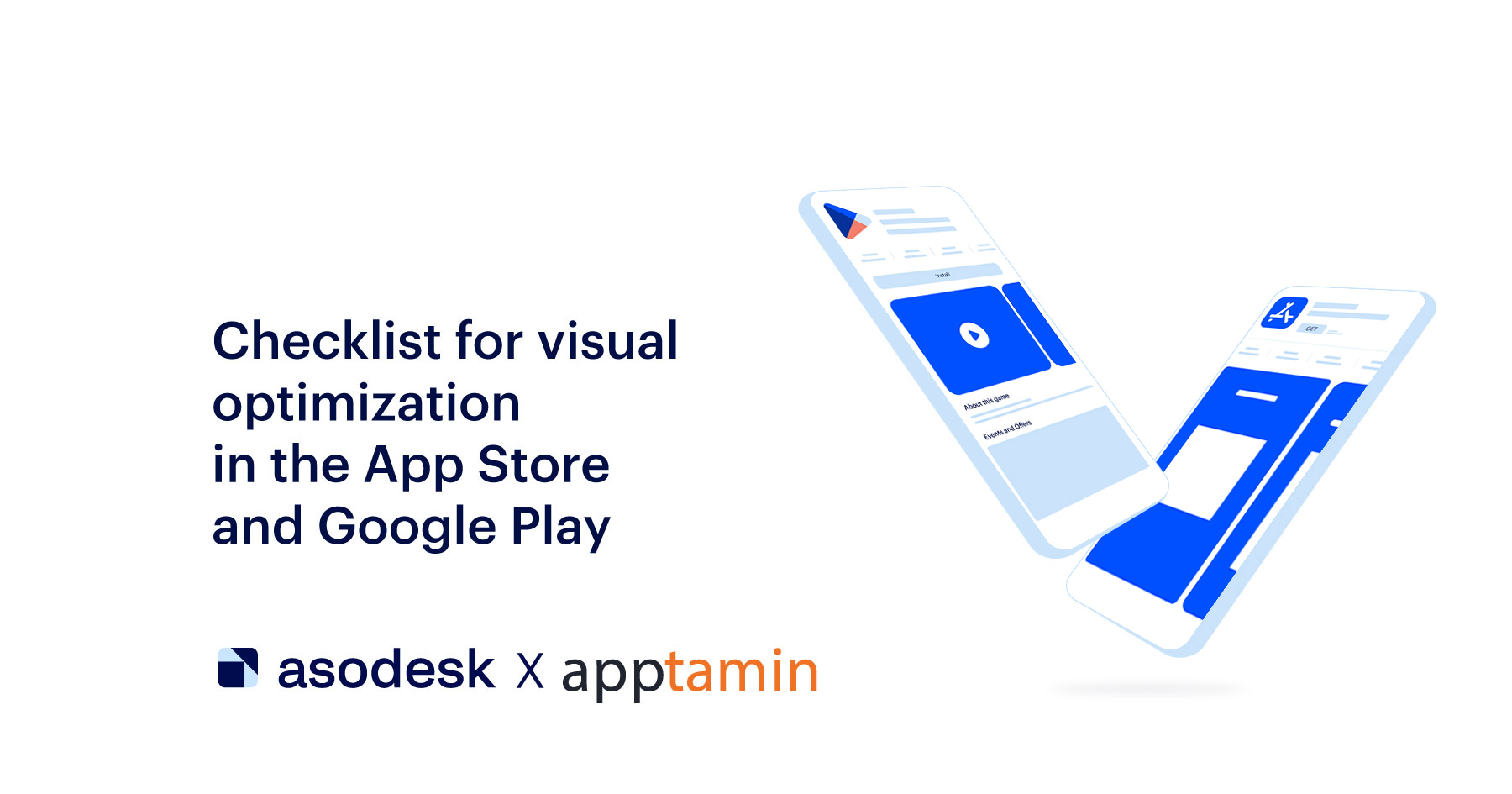 Checklist for visual optimization in the App Store and Google Play

Visual assets are one of the first things the user sees and can be very influential in the download process. Users will rely on your visual app icon, screenshots, and videos to decide whether to install your app or mobile game. So read on to find out how you can make the best of them and boost your conversion rate in the process. Read more

Guides
Top 18 app promotion challenges you can solve with Asodesk

Top 18 app promotion challenges you can solve with Asodesk

To effectively promote an app in the App Store and Google Play, publishers need to conduct App Store Optimization, work with reviews, as well as study competitors and the market. In this article, we will explain how to solve all these tasks with the help of Asodesk. Learn about all the features on the platform in one guide and learn how to apply them to your work. Read more