Sergey Sharov
ss@asodesk.com
Co-founder of ASOdesk and Angle Connect Agency. In ASO since 2013. Creator of the ASOdesk Academy, author of courses, Knowledge Base, certification and testing programs, organizer of ASO Wine Time, and ASO Fuckups events.
All articles by author
4 min read 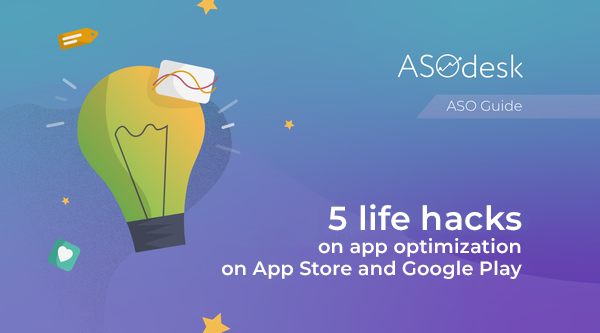 To get to the top of app stores is challenging. Therefore, it is crustal to continuously look for new approaches and test hypotheses. Sergey Sharov, co-founder of ASOdesk and Angle Connect agency, shares life hacks that will help improve keyword positions and get more installs.

This is a series of articles based on ASOdesk Academy lectures, where we touched on all aspects of optimization for applications. We have already told you where to start working on ASO, published a checklist on working with Google Play and explained what affects your positions in stores. You can watch the original lecture here:

1. Add words with mistakes to the core

People make mistakes, including in spelling — that’s normal. Therefore, words with mistypes and mistakes should also be taken into account when composing a semantic core. For example, the word “music” can be written as “musik”. Both options bring traffic, so it is necessary to include it into metadata. If there is traffic score from words with mistakes — it should be used.

2. Save on the characters in the title

Another way to save space is to move the brand name onto the icon. Like Tutu.ru and McAfee did. The App Store has a limit of 30 characters, and Google Play has 50 characters. The six characters saved are 20% of the allowed in the App Store and 12% on Google Play.

If the brand is reflected on the icon, you will have more space in the title. The title counts more in the ranking than in other indexed fields. Therefore, it should have the maximum of keywords.

Diacritics are superscript, subscript, or intra-line characters. They can be found in Spanish, French, German and other languages. For example, in the Spanish the word avión (plane) has the diacritic letter ó. Traffic score and Search Adds of such words are minimal, and mobile app stores do not take them into account.

If you compare traffic score of avión and avion, the second one will show significantly higher one, and the first one may not have any at all. So do not hope that if there are diacritics in a language, everybody is supposed to use them. People are usually lazy to type them. They can be used as extra keys if they have traffic score, otherwise replace them in metadata with words without diacritics.

Stop words are a list of words that not necessarily shall be added to metadata. The App Store accounts them by default. Like app, apps, free, and so on. They’ll take the space and there’s no way they can help. So don’t use them to save characters and your time.

Please find the complete list of these words in the image.

For example, for Russia additional localization is Ukraine. So, if it’s important for you to move outside the Russian market, use it. This helps increase limits: +100 words for keywords, +60 characters in title and heading.

Here you can see the full list of additional languages on the App Store.

ASO is the constant testing of the new ways

App Store Optimization helps to become more visible in search process and increase the number of app installs. This is an ongoing process through the entire life cycle of the application: you need to update metadata, analyse competitors, measure efficiency, test new hypotheses. Please find more information about App Store Optimization in our previous article. Look for methods that will be effective for your app, and try out tips from the article to bypass competitors, be among the top apps and get more installs.

Written by
Sergey Sharov
ss@asodesk.com
Co-founder of ASOdesk and Angle Connect Agency. In ASO since 2013. Creator of the ASOdesk Academy, author of courses, Knowledge Base, certification and testing programs, organizer of ASO Wine Time, and ASO Fuckups events.
All articles by author
Share article:
Subscribe to receive handpicked App Store Optimization Tips
I agree with Terms and Conditions
Also read:
Guides
How to promote an app on Black Friday: tips from AliExpress, DHgate and PUGS Mobile

How to promote an app on Black Friday: tips from AliExpress, DHgate and PUGS Mobile

Adidas and Best Buy app installs increased by 500% on Black Friday 2019. To make this year Black Friday productive for you, we have collected the best promotions from AliExpress, DHgate, Bangood, PUGS Mobile, Township App, Hero Wars and others. Take inspiration from competitors and adapt their ideas for your application. Read more

App Store Optimization
How to build a semantic core for your app: step-by-step guide

How to build a semantic core for your app: step-by-step guide

Building a semantic core is the most important part of App Store Optimization, which the effectiveness of further promotion depends on. You need to find specific keywords that will bring you installs from the search. In this article we will explain in detail how to properly build a semantic core. Read more

When ASO will start bringing results

The results of the App Store Optimization can be disappointing. To prevent this from happening, you need to understand the nuances of the niche and build realistic expectations. In this article, we will discuss which factors affect app promotion, when the result of ASO will be noticeable and what to do if expectations have not been met. Read more