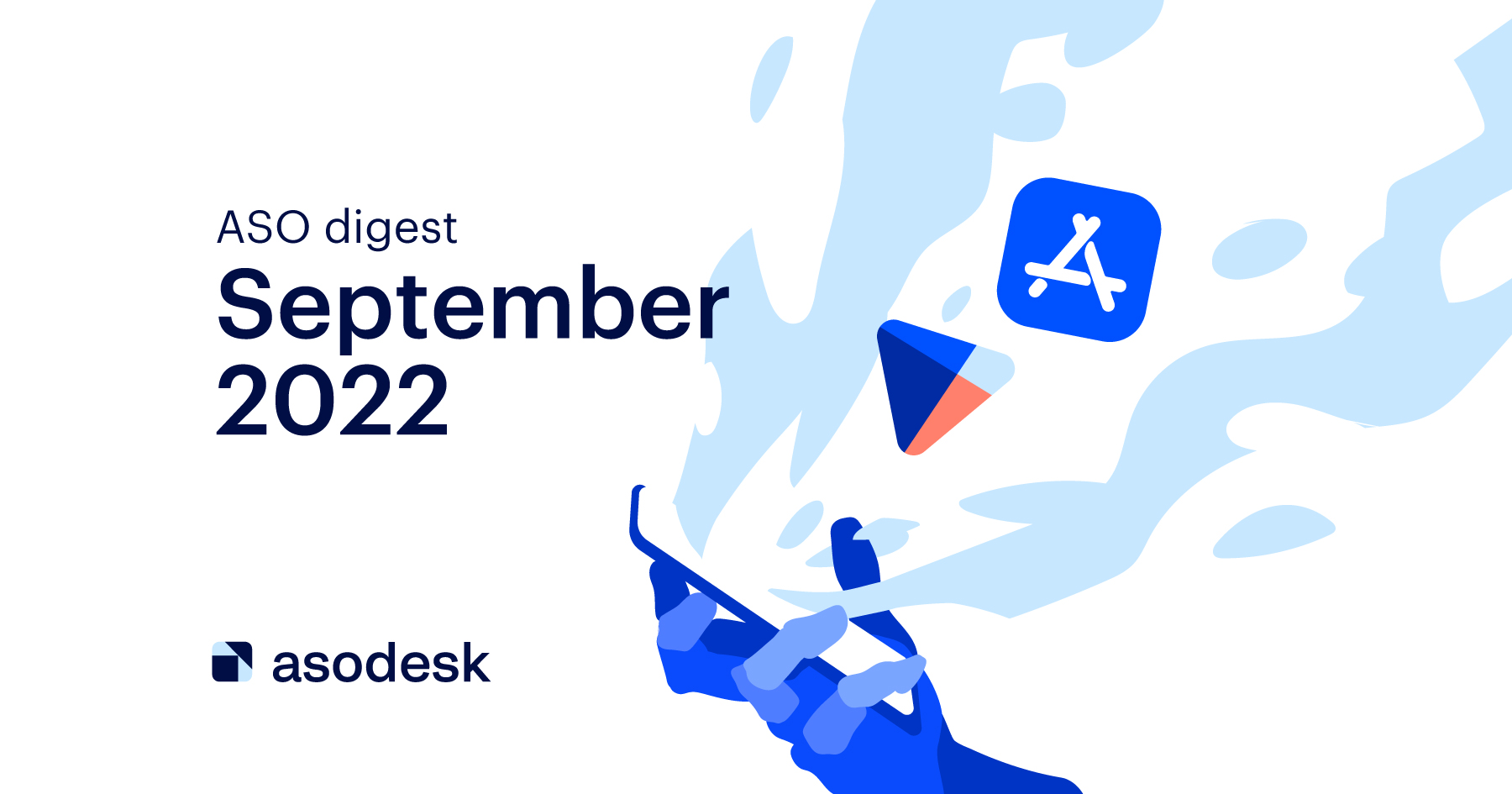 Google implemented a 24-hour delay for the publication of new reviews. Apple increased prices for in-app purchases in many countries. Asodesk introduced the new Keyword Dynamics tool. Read all important App Store Optimization news from the App Store and Google Play for September in our digest.

On September 9, the Google Play Console announced that Google Play reviews will now appear 24 hours after they are submitted.

Google notes that this update will help them automatically recognize suspicious user activity. Developers will be able to respond to reviews in the Google Play Console right away, but there will also be a delay when posting responses. Developers will also have additional time to solve the user’s problem before the user’s feedback appears in the public domain.

Good news for Asodesk users: you are still able to see and reply to all new reviews immediately after a user leaves a review, as well as use the Report a Concern feature in the Review & Reply Board. You will also get notifications about new reviews right after a user submits them.

To access all these features, you just need to set up integration with Google Play Console’s “Report a concern” feature in Asodesk, if you haven’t already done this.

In this article, we shared important facts and ASO specialists’ opinions on this change.

Google introduced 3 new changes that will make it easier to find and install apps on Google Play Store’s mobile app:

Homepage for other devices

There is a new “Other devices” page for users with a Wear OS watch, Android TV OS, or car with Android Automotive. On this homepage, users will find app & game recommendations, and editorials tailored to their non-phone devices.

Users can now find apps that are compatible with their selected device with a new device filter in search.

Users now can install apps on devices remotely from their phones, just by selecting the relevant device.

What is more, Google recently launched a great redesign of the Play Store website. Google developers simplified navigation, improved visibility, and increased accessibility. The new site also allows users to easily find and manage apps and games across devices. Users can access the Play Store site from their non-Android computer or phone to browse, search, and remotely install apps on all of their Android devices.

Google has implemented a feature to filter reviews and ratings for different types of devices, as announced in a message to developers in the Play Store Console. This was a long-awaited update. Google wanted to implement this change at the beginning of this year, since the company first announced it in August 2021.

If you go to any app in the Play Store, you will see a notification under Ratings and Reviews confirming that these ratings are “from people who use the same type of device as you”. This does not necessarily mean that you will see unique averages, although the number of reviews will differ depending on the device you are using.

Ultimately, this small change can make a big difference in how users download apps. Users will better understand how these apps work on their devices and can choose the apps that match their expectations.

In March, Google announced that developers will be able to use third-party payment processors along with Play Store billing.

From September 1, Google Play opened a User Choice Billing pilot program for non-gaming apps. The pilot markets for User Choice Billing are countries from the European Economic Area, Australia, India, Indonesia, and Japan. Developers of non-gaming mobile or tablet apps who have a legal business can register to be able to offer in-app billing alternatives.

Developers can participate in the program if they:

Developers must pay the appropriate service fee to Google, even when using third-party payment processors. It is 4 percentage points lower than usual, meaning the same as when using the alternative system in South Korea (for example, for subscriptions it is 11% instead of the standard 15%). The company continues to claim that these fees are necessary to support “ongoing investments in Android and Google Play”.

Update on subscription in Play Policy came into force

Starting September 30, the update about subscriptions in the Play Policy came into force. Developers must ensure that users can:

If the subscription was purchased through the Google Play payment system, the system will not return the money for the current period. The user can receive content until the end of the subscription period, after which it is canceled.

Developers can set more flexible cancellation and refund policies, but within the bounds of the law. Google Play also recommends informing its users of any changes.

Apple increased prices for in-app purchases in many countries

Apple announced that prices on App Store in-app purchases will be increased in several countries starting October 5th. These countries include Egypt, Japan, Malaysia, Pakistan, Poland, South Korea, Sweden, Vietnam, and all territories using the euro as their currency.

These price changes could occur due to the depreciation of the local currency against the dollar. For example, the euro has now reached parity with the dollar, which has not happened in the last 20 years. In Vietnam, the price was increased due to new local tax rules.

For the Eurozone, in-app purchases will rise from €0.99 to €1.19. For example, the price of an in-app purchase worth 9.99 euros will be increased to 11.99 euros. Developers can keep subscription prices for current subscribers if they want. See all price changes in the document.

Apple made Live Activity and ActivityKit available in iOS 16.1 beta and Xcode 14.1 beta

The new ActivityKit framework became available in iOS 16.1 beta and Xcode 14.1 beta. Live Activities allow users to keep track of the app’s content in real-time. The app’s Live Activities appear on the lock screen and in Dynamic Island — a new design that offers an intuitive way to use the iPhone 14 Pro and iPhone 14 Pro Max.

Live Activity and ActivityKit will be included in iOS 16.1, which will be available to all users later this year. Developers will be able to submit live-action apps to the App Store after the iOS 16.1 release candidate becomes available.

Now developers can create their own Live Activities. Apple has released a guide on the API and development of new widgets.

WeatherKit can provide apps with a wide range of data about the weather. Now developers can easily use WeatherKit in their apps for iOS 16, iPadOS 16, macOS 13, tvOS 16, and watchOS 9 with a platform-specific Swift API, and on any other platform with a REST API. Up to 500,000 API calls per month are included with Apple Developer Program membership.

We have added a new Keyword Dynamics tool that allows you to monitor changes in app positions for keywords from the Keyword Table.

Here are 4 tasks that can be solved using Keyword Dynamics:

1. Track the dynamics of app positions on the convenient Keyword ranking distribution chart.
2. Check how app positions have changed compared to a selected date in the Keywords table.
3. Find out how many keywords your app is in the top search results by using the Top tab.
4. Check position dynamics for separate keyword groups.

The tool is available to users with Business and Enterprise plans. To use the tool, click the Dynamics button in the Keyword Table. Learn more about how to work with this tool in our article.

Subscribe to our newsletter and get important App Store Optimization news every month, as well as useful articles on ASO, working with reviews, and mobile app marketing.

Written by
Julia Suliagina
is@asodesk.com
Asodesk Content Manager. She writes newsletters and articles in blog. Make all complex topics in ASO easy and interesting.
All articles by author
Get the latest news, case studies & articles on app growth, ASO, and customer support
I agree with Terms and Conditions
Also read:
News
ASO news digest for November 2022 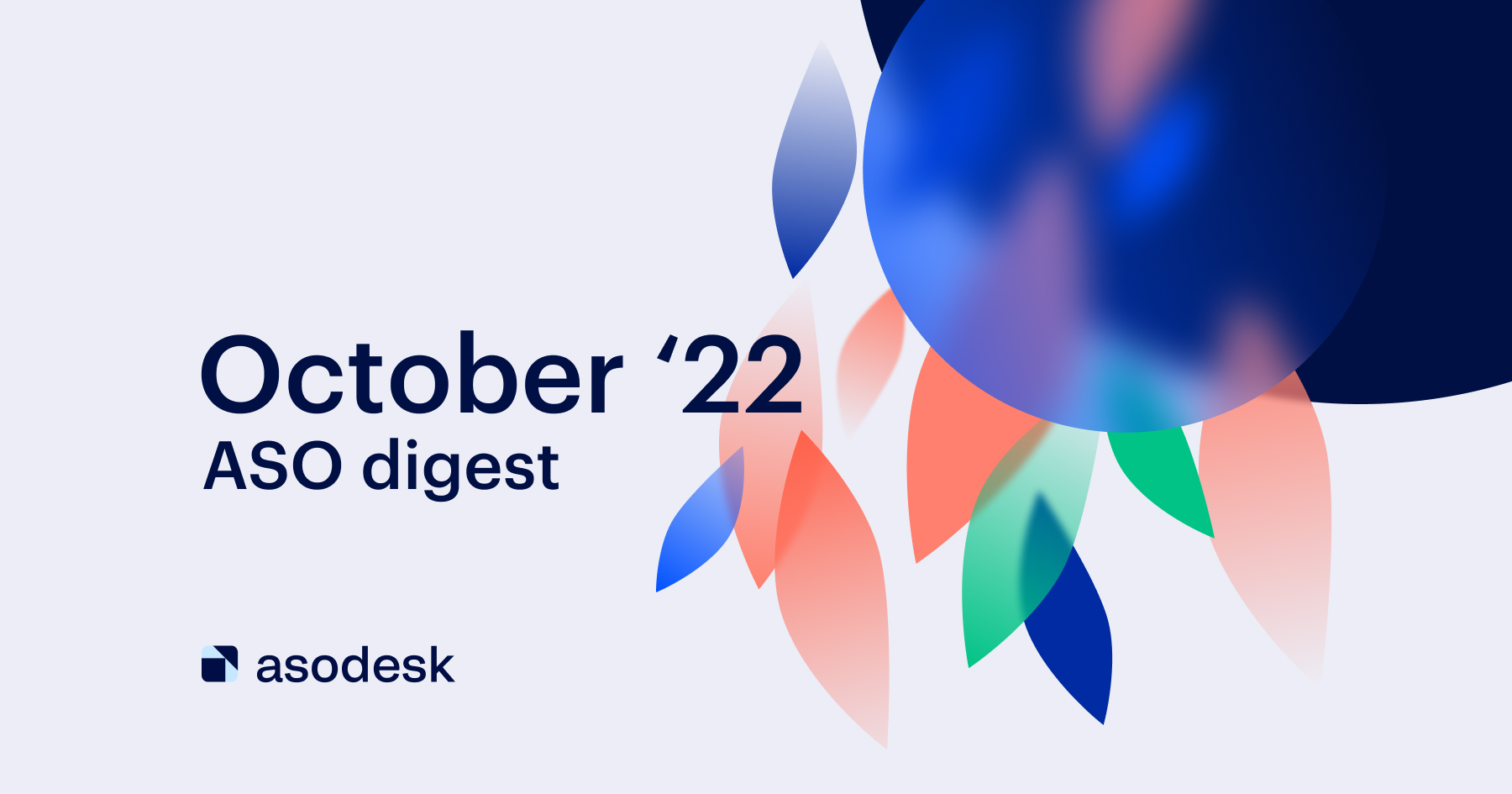 Apple updated its App Store guidelines. Google introduced 5 updates that can help you to better understand your app’s delivery performance. Asodesk released a global market research on which apps need ASO. Read the most important App Store Optimization news from October about the App Store, Google Play, and Asodesk in our digest. Read more

Google implemented a 24-hour delay for the publication of new reviews. Apple increased prices for in-app purchases in many countries. Asodesk introduced the new Keyword Dynamics tool. Read all important App Store Optimization news from the App Store and Google Play for September in our digest. Read more