On November 2 the new EU Digital Markets Act (DMA) came into force. As a result, Apple may have to give users access to third-party stores and the option to download their apps on iPhone and iPad.

DMA rules will apply to technological giants, which come up with gatekeeper criteria and make them open various services and platforms for other companies and developers.

Apple is supposed to be clarified as a gatekeeper given the scale of its annual turnover in the EU, its ownership, and its exploitation of platforms with a large number of active users. The DMA is supposed to allow users to download third-party stores and apps which are unpublished in the App Store. It will allow developers to promote their apps outside the App Store, use third-party billing, and access data collected by Apple.

On December 8, Apple will hold live presentations and Q&A sessions with experts. You can learn how to:

All participants of the Apple Developer Program can register for the conference.

Google announced the expansion of its third-party billing pilot, which allows Android app developers to use payment systems other than Google’s system. The program will now be available in new markets, including the US, Brazil, and South Africa.

The company first announced its intention to launch third-party billing in March this year, with Spotify as its first partner.

Since then, the program has expanded consistently. For example, Google invited other non-game developers to apply for the 3rd party billing program in select markets last month, including India, Australia, Indonesia, Japan, and the European Economic Area (EEA). With this expansion, third-party payment systems will be available in 35 countries.

Google also announced that Spotify started rolling out the program. In addition, Bumble has now joined Google to test user-selectable billing on its app, and plans to roll out options to users in select countries in the coming months.

Developers interested in implementing third-party billing must follow UX guidelines that detail how to implement this feature in their apps. These guidelines require developers to display an information screen and a separate screen for selecting a payment method.

Currently, developers on Google Play can use LiveOps cards to promote offers, launches, and events on the platform. Google added powerful new placements and formats for these cards, which will help apps to reach more users. In addition, the company plans to add support for new content types for LiveOps cards and rename LiveOps as Promotional Content. Promotional content is already available for many games on the Play Store, and Google plans to get more developers involved next year.

Google also introduced a new custom store listing to help return users who have used an app before. By the end of this year, a new Churned-user Custom Store Listings will appear that will allow developers to “tell a different story to users who have already tried uninstalled apps or games.”

Google is expanding its security initiatives and policies to provide developers with the best possible experience on the Play Store. The company is launching new Play Integrity API features to protect against risky traffic and a new program to protect apps from coordinated review attacks. It’s worth noting that Google recently added a temporary buffer for ratings and reviews in the Play Store to achieve a similar goal.

Google told 9to5mac that they are testing an organic discovery feature which shows major updates, ongoing events, and offers that could be of interest to users.

At the moment, tapping the search bar brings up the keyboard and shows your four most recent queries. 9to5mac tested Version 33.0.17-21 of the Play Store. Instead of recent search requests, Google Play suggested apps which the user has never searched for or interacted with.

Google changed its criteria of the technical quality of apps and listed core vitals that developers should consider. The company wants to steer users away from low-quality apps and games and exclude them from “impactful discovery surfaces such as recommendations”.

User-perceived crash rate. The percentage of daily active users who experienced at least one crash that is likely to have been noticeable (e.g. in the foreground).

User-perceived ANR rate. The percentage of daily active users who experienced at least one ANR that is likely to have been noticeable (e.g. after user input).

Quality bar per phone model. This is the new metric that Google will measure. Technical quality may depend on the device. Apps can work stably and smoothly on one model but unstably on another. That is why Google made a new bad behavior threshold that is evaluated per phone model (e.g. Pixel 6). At launch, this threshold will be set to 8% for both the user-perceived crash rate and user-perceived ANR rate.

If your title exceeds the device bad behavior threshold on any core vital for a given phone model, then Google Play may reduce the visibility of your title for users on that phone model.

Google can exсlude the app title from some discovery surfaces or even, in some cases, show a warning in the app store listing, which tells the user that the app may work inconsistently on their devices.

The company started to use this warning on November 30, 2022, in cases where the user-perceived crash rate or user-perceived ANR rate on the phone model is higher than 8%. The text on the warning may vary.

Google shared how they improved their work on apps for kids.

1. Google expanded Play’s Teacher Approved Program. Now all apps that come up with Families Policy can be reviewed and shown on the Kids tab. In the future, the requirements for the Designed for Families program will be merged into the broader Families Policy. By combining requirements, Google wants to give families more Teacher-Approved apps and help developers to reach more users. Google advises joining Google Play Academy to learn more about the development of quality apps for kids.

2. Google changed its Ads Policy to protect children. The company recently added changes to Families Self-Certified Ads SDK for showing ads to kids and simplifying app development. Developers who participate in the program should define which versions of their SDK fit for use in Family apps, and you can check the list of self-certified versions in our Help Center.

Next year all Families developers will be required to use only versions of Self-Certified Ads SDK that are defined as appropriate for use in the Family apps. The company recommends preparing for this change before the Policy comes into force.

3. Google building Transparency with New Data Safety Section Options. In the upcoming weeks, all apps that include kids as their target audience will be able to demonstrate how they come up with the Play Families Policy with a special badge in the Data safety section. To learn more about the badge, go to the “Security practices” section of your Data safety form.

ASO Stack users noticed a new ad placement in Google Play Search for unbranded queries (such as game and sport). Previously, there were just three ads in search without a download button. Now there is only one app instead of them, but with a “download” button.

Google announced that parents or “the family manager” can now make purchases in their or their child’s app without setting up a family payment method.

For example, when a child is trying to purchase your app, and a family payment method wasn’t set up, the request for purchase will be sent to the family group manager, who can buy the app with any payment method on their phone — including gift cards.

If the admin wants, they can still set any general payment method. Now parents can quickly approve kids’ payments in their profile with no need to set a standard payment method.

Read about other improvements in purchases that Google made this year.

Previously, the Explore button in ASO tools allowed you to go to the Keyword Explorer tool, where you could view the search results for a keyword. Now you can view a table showing the search results directly in various ASO tools, saving you even more time.

The Updated Explore button is available with the following tools:

You just need to click on the button to see the search results.

We have also added extra data for each app from the search results:

We have extended Black Friday: you can save 35% off on annual plans

Now is still the best time to choose an Asodesk plan, as we extended our Black Friday discounts! Until December 9, you can get 35% off any annual plan.

Subscribe to our newsletter to get digests with App Store Optimization news, as well as useful articles on ASO, mobile marketing and working with reviews. 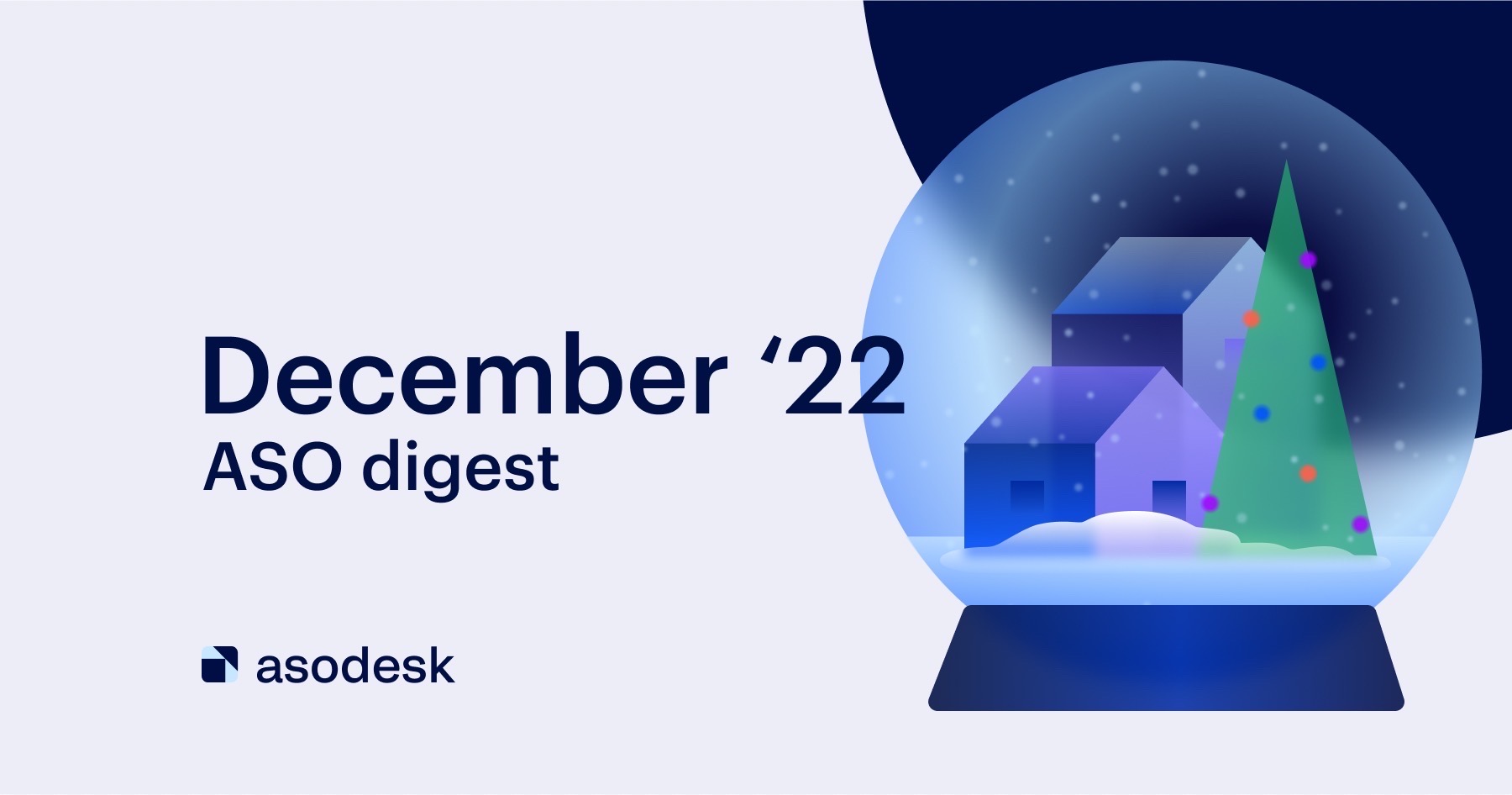