In the last digest of 2020, we have collected important news and updates from December that will affect ASO in 2021. Apple started notifying developers about fee cuts and once again became subject to Facebook criticism. Huawei released a beta version of Harmony OS. Google added new filters to Google Play. ASOdesk received 9 G2 badges and released a global system update.

In November, Apple announced that developers with less than $1 million a year would be able to pay 15% commission instead of 30%. The 30% commission will take effect if the developer passes the $1 million threshold.

Last week, Apple started notifying developers of the commission cut from January 1. You can read more about the program and apply here.

Taxes will be adjusted 15 days after the end of the fiscal month in which your application was approved. For example, if your application is approved on February 10, 2021, the tax will be reduced from March 14, 2021.

Program members are prohibited from transferring applications between accounts. If you initiate the application transfer or accept the transfer after December 31, you will no longer be able to participate in the program.

Apple users used to share apps through the Apple Family Sharing feature; now in-app purchases can also be sent to family members. The App Store subscription section has a Share New Subscriptions feature that is enabled automatically. The new feature is available in the current version of the operating system.

New version of iOS 14.3 has been released with Apple Clip Codes and data tags

Apple released iOS 14.3 on December 14. The new version has a few features that app developers should take into account:

Apple will remove apps that track user data without permission

Since December 8, on the App Store application page, developers are required to indicate the data that they will collect from users when the application is launched. Read more about the privacy policy and data collection procedure here. From the next update in 2021, app developers will also have to request access to users’ IDFAs through a pop-up window when users log into the app.

Apple Senior Vice President Craig Federighi stated that, starting from 2021, apps that do not meet the requirements of ATT (App Tracking Transparency) will be removed from Apple. Each application is required to request access to personal data and publish privacy labels on the application page.

Setting up targeted ads by e-mail addresses and creating look-a-like audiences will be difficult. Additional specifications have been added to the “Tracking” section of the App Store privacy policy. Without users’ permission, developers cannot:

The company bought front pages of leading newspapers such as The New York Times, The Wall Street Journal, and The Washington Post, to criticize Apple’s policies. The materials were published under the headline “We’re standing up to Apple for small businesses everywhere”.

It is possible that Facebook pressure will affect Apple and they will ease the privacy policy restrictions for developers. So far, in response to Facebook’s criticism, Apple accuses the company of “disregard for user privacy”.

WhatsApp (the messenger that is owned by Facebook) also considers Apple’s behavior to be anti-competitive due to new privacy labels. WhatsApp executives note that Apple’s iMessage is pre-installed on devices and is not placed on the App Store. This violates privacy policy as users will not see what data iMessage collects.

Back in the summer, at the request of the Chinese government, Apple started removing unlicensed apps from the App Store. Now The Wall Street Journal says that Apple will continue to remove apps and games from the Chinese App Store.

The PRC government obliges developers to pre-certify the software before it is published on the App Store. “Developers of premium games and those with in-app purchases must provide us with a government license to publish software in China by December 31,” Apple states.

On December 24, The Wall Street Journal reported that more than 100 apps have been removed from the App Store at the request of the Chinese government. Including the popular travel app, TripAdvisor.

The new EU payment directive will start working from December 31

From December 31, the payment authentication policy will come into effect in Europe. Apple notes that this payment directive will enhance security of online payments. App Store users will automatically be redirected to their bank page to confirm their payment, and then redirected back to the purchase page.

Huawei says goodbye to Android and launches its own software, Harmony OS. The company is recruiting developers to test the first beta of Harmony.

You can test the new OS using  Huawei DevEco Studio IDE simulator (version 2.0 Beta 3) from the Harmony OS official website. If your smartphone supports Harmony OS, you can also simply register and upgrade to it. When the registration is approved, you will receive an invitation from Huawei and instructions for installing the software.

Harmony OS is still unstable and can only be used by developers starting out on the Harmony platform. Make sure to back up your data before proceeding. It is possible to downgrade to the official EMUI 11, based on Android, during which all user data may be deleted.

Thanks to ASOdesk fetchers our specialists noticed the mass implementation of application filters in search results of Google Play.

Applications can be filtered by the following parameters:

The number of filters depends on the search query. Highly rated apps get a greater advantage over their less rated competitors. The platform also supports new applications.

Google Play also promotes paid apps, which are funded by the company, as well as featured apps and Google Play Pass games, which is a subscription-based gaming service.

ASOdesk is a recognized IT service! We received 13 ratings and 9 G2 badges

This winter we received thirteen G2 ratings in three main categories, and were awarded nine badges.

G2 is a highly reputed platform that surveys online business services. G2 analyzes customer satisfaction and brand presence in the market using 15 metrics. Based on this data, G2 researchers rank and award the best in the industry.

For an IT service, getting a G2 badge is like winning a Grammy! Read more about our awards.

We are most proud of the Users Love Us badge. It is awarded for customer reviews above 4 points. The average score of ASOdesk is 4.7 out of 5. Read reviews about us on the G2 website.

We would like to say thanks a lot to all our users! Our achievements are the success of all our users and ASOdesk team. Your comments and suggestions help us to get better.

A significant event in the history of ASOdesk development: we have updated the system interface and added new tools for working with reviews in the App Store and Google Play.

In 4 years we have created more than 30 professional tools for ASO specialists. To enhance the capabilities of the system and make it useful — not only for ASO specialists, but for all types of users, such as marketers, product managers, and support specialists — we needed to review the product completely.

And now we are ready to introduce you to a brand new ASOdesk with faster system performance, improved navigation, and tools for working with reviews.

Professional tools allow you to:

This way, you can save your technical support department time and increase customer loyalty.

Apply to connect to beta testing of the updated ASOdesk and get unlimited access to all tools, with no limit on replies to reviews.

Upon expiration of beta testing, we will provide all participants with a personalized plan that will be much more affordable than the standard rates.

We wish you a Happy New Year! We believe you will be able to achieve all your goals in 2021. Dream, do not be afraid, go for it, and everything will surely work out for you. Thank you for being with ASOdesk in 2020. We hope that in 2021 our system will help your mobile business develop even more. We will do our best to teach you the intricacies of mobile marketing through our articles, posts, and videos.

In the first month of spring, Google Play developer fees lowered to 15% on the first million dollars of revenue per year. Apple announced WWDC 2021 will be held on June 7–12. The number of active AppGallery users has exceeded 530 million per month. All ASOdesk plans have become more affordable. Read all the news for App Store, Google Play, AppGallery and ASOdesk. Read more

News
We received 8 badges in the G2 Spring Reports

We received 8 badges in the G2 Spring Reports

G2 has once again recognized ASOdesk with several awards. This time we received eight badges in the spring reports. G2 commented on our high performance, easy admin, and business collaboration. We were also recognized for best meeting requirements and for the tendency of users to recommend ASOdesk. Read more 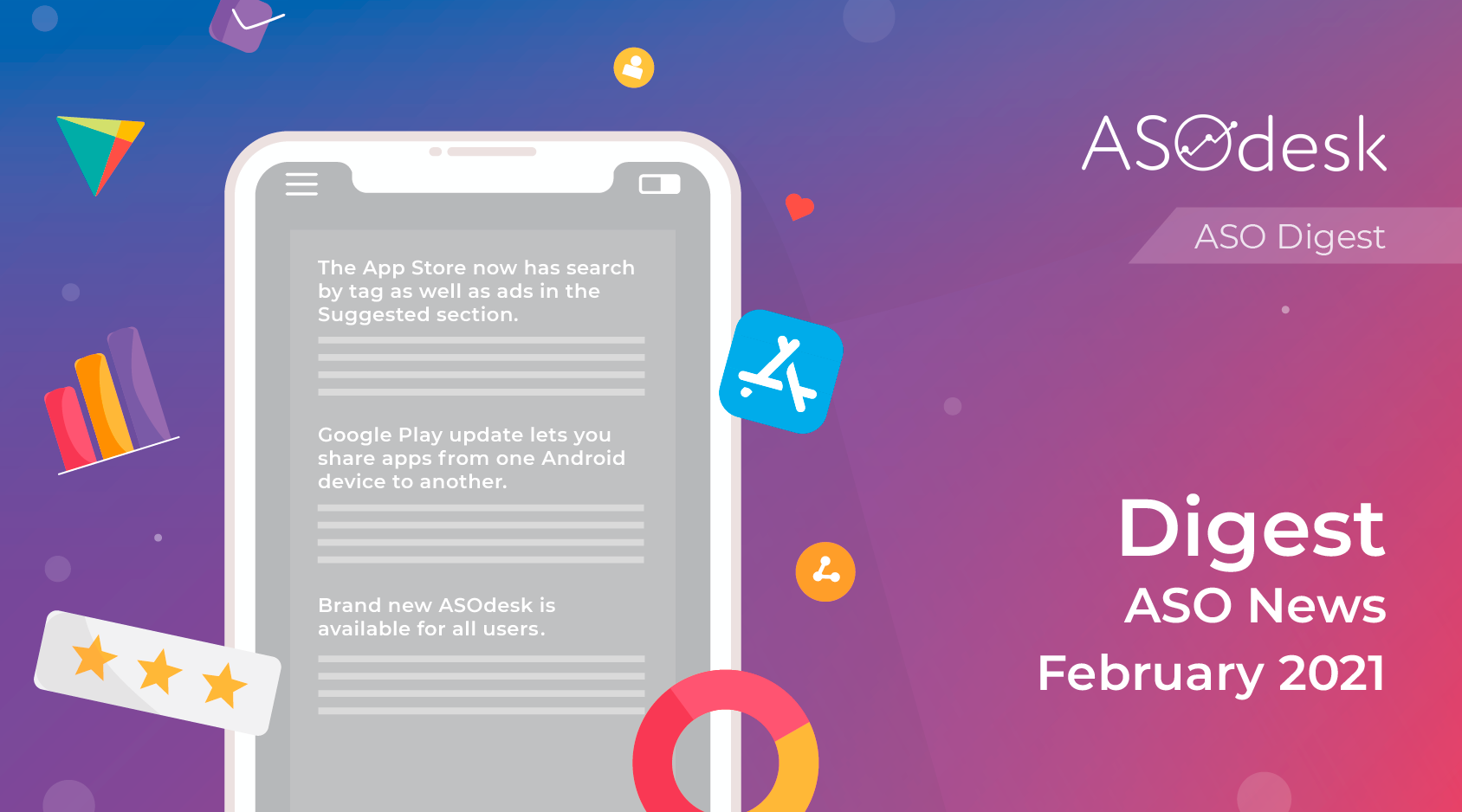 The App Store now has search by tag as well as ads in the Suggested section. Google Play update lets you share apps from one Android device to another. Huawei announced Huawei Ads, an advertising exchange platform. A brand new ASOdesk became available for all users. Read more