Google is developing significant changes to its application metadata requirements. Apple released iOS 14.5 and added the tag search feature, as well as ads in Suggested. ASOdesk added new capabilities for app review analytics. Learn all about the new Google Play rules and the App Store changes in our April digest.

Google is changing the requirements for application pages on Google Play

Starting from the second half of 2021, new requirements for the application page on Google Play will apply. Google has published a preliminary version of the rules.

We reviewed the Google guidelines & updated policies and highlighted the main changes:

1. App names have been shortened to 30 characters.

2. You cannot add information about the number of installs, awards, rating, and regular reviews or critics’ reviews to the app title, short and full description, icon, video, screenshots, or feature graphic.

You may not use the words “Best”, “#1”, “Top”, “New”, “Free”, “Discount”, and “Million Downloads”. None of this applies to the functions of the application, so it should no longer be used in the metadata on Google Play.

3. You cannot add calls to action such as “Download now”, “Install now”, “Play now”, or “Try now”. This applies to the app title, icon, short description, screenshots, and videos.

4. Do not use graphic elements that can mislead the user.

5. The title and short description should not contain emojis and words written in capital letters. Caps Lock is only allowed for acronyms and brands that are capitalized on Google Play.

6. You are not allowed to use a large number of keywords in the short description. Extra keywords will not increase the position of the application but will make the text difficult to read.

7. Avoid content that will quickly become outdated. Update information related to specific dates, such as holidays, in a timely manner.

If an app doesn’t meet Google requirements, it may be blocked on Google Play or removed from the store.

We asked the experts how these changes are going to affect ASO.

Artiom Tkachuk, ASO expert at ASOdesk, noted that due to the reduction in the number of characters allowed, changes in the Google Play search algorithm are possible. But the rules were created primarily to make Google Play fairer. All of the seven actions mentioned above are often used by developers in bad faith to mislead users. It’s possible that Google Play decided simply to streamline these elements, and this will not affect the algorithm and the majority of developers’ work.

Maria Chernoplyokova, ASO specialist at Mail.ru Group, predicted that the number of applications with the same names would increase in the App Store and Google Play. It will become more difficult to get indexed for the most important keywords, as there are fewer characters for them.

Google’s new feature will help speed up the app installation process, as well as make apps open and run faster. Google will be collecting data about the features that new app users use the most after launch. This will make apps launch faster, which can positively influence behavioral metrics. The function has been working in test mode so far.

Google Play design has been updated on Android devices

Google has removed the hamburger menu from the app store. Now, to get to your applications or profile, you need to tap the user’s photo in the upper right corner.

If the interface has not auto-updated, you can force quit the app. After restarting the app, the design will change.

Google has made it possible to customize personalized KPIs at the top of the app dashboard. To set up KPIs, on the dashboard for any app, scroll down to the KPI section and click “choose KPIs”. You can start with suggested KPIs or build your own.

Read more about the new feature in Android Developers Blog.

With the release of iOS 14.5, new privacy parameters have been added. Now, when opening the app for the first time, the app developer must ask permission to track user data. Users will see which apps have requested permission and will be able to change the settings if necessary.

Furthermore, the fight against Apple’s policy continues. On April 28, a coalition of German advertisers filed a lawsuit against Apple. They claim that Apple continues to collect user data and abuses its power. Now the company will be reviewed by The Federal Cartel Office of Germany.

Tag search in the App Store

Tag search launched on April 29 in the US, Canada, UK, and Australia. Testing of the function began back in February, but it was officially released in April.

We analyzed how the tag search functions and shared expert opinions on how the feature will affect the work of ASO specialists. Read the comments by Thomas Petit (Independent Application Growth Expert), Artem Tkachuk (ASOdesk), Maria Chernoplyokova (Mail.ru Group), and other experts in this article.

The company tested ads in the Suggested section back in February  2021, after which Apple officially introduced this feature on May 4. Ads can now be shown even before the user enters a query. Ads appear at the top of the list of suggested apps. Now the app can be promoted throughout the App Store, not just in response to specific search requests.

Like in the App Store search results, ads in Suggested can appear in any country or region where Apple Search Ads are available. Ads are automatically generated and easily integrated into the user interface.

Advertising prices are based on the CPM (cost per thousand impressions) model; developers determine the maximum amount they are willing to spend. Read about ad features and creation in Apple Search Ads Help.

Apple has published new rules as part of App Tracking Transparency, according to which the company will prohibit applications that offer users cash rewards for tracking their data.

Apple allows developers to send notifications that explain to the users what their data is used for. However, these messages have to be simple and only contain words such as “Next” or “Continue”. You cannot use the word “Allow”.

ASOdesk now has features that will simplify the analysis of reviews and make it more efficient.

Rating Analysis allows you to analyze the app rating. You can view statistics on the number of reviews, the average rating in the country, and the version of the application for any period.

You can now view deleted reviews in the Replies & Reviews Board. You can also check for changes in reviews using the Reviews Changed filter and see featured reviews for a specific period. In addition, we have added user information to each review.

Read more about the features listed above in this article.

Try out the new tool functions. They are now free and unlimited as part of the open beta testing. Reply to an unlimited number of reviews for all your apps.

ASOdesk hosted a webinar on the top ASO mistakes

On April 28, a webinar with Ryan Kelly “Top ASO Mistakes That Even Big Brands Make” was held. Ryan Kelly is a mobile marketing expert with deep knowledge of App Store Optimization. He has worked for Gummicube, Phiture, AppAgent and Neil Patel Digital, and other leading agencies.

At the webinar, we analyzed the main mistakes and unsuccessful ASO cases, as well as important aspects in the work of an ASO manager.

Watch the webinar recording and learn how to avoid mistakes in ASO.

On April 21, 2021, the App Growth Summit New York was held — a well-known event for mobile marketers and app growth professionals. In case you missed it, here is our article where we summarized the main ideas of the summit.

We spoke about data-driven retention strategies, principles of work with the new IDFA conditions, tips on user engagement, promotion through TikTok, ways of user onboarding, and hacks for app growth. 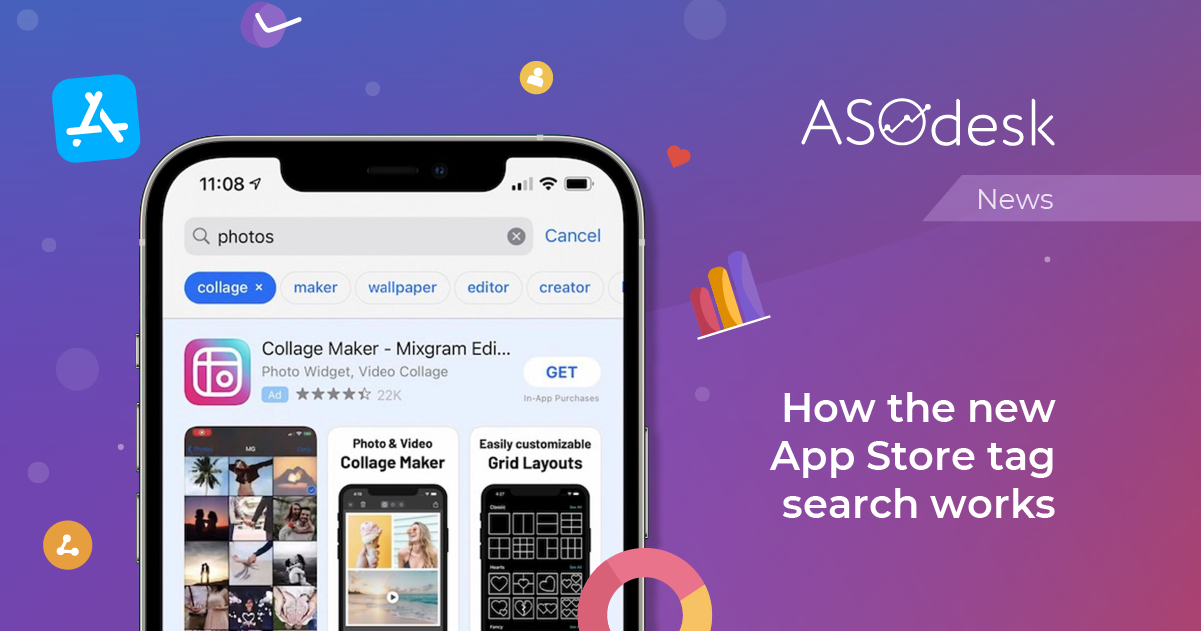