The ASOdesk mobile marketing platform has conducted research and analyzed App Store rankings changes in European countries with strict and moderate quarantine measures before and after the COVID-19 outbreak. According to the research, a quarantine changed the app market differently in isolated countries of Europe and in Sweden.

What the App Store says about the lack of quarantine in Sweden?

Stockholm remains the only capital in the EU which did not impose any harsh restrictions, such as a quarantine. Swedish Prime Minister called for "heavy responsibility" from everyone and "do not spread panic or rumours". People go to their job, schools and universities are open. All gatherings of <50 people are allowed. The App Store reflects this different attitude to the COVID-19 situation as well.

Business apps started to grow 2 weeks after the New Year. E.g. Microsoft teams app started to gain positions in mid-January 2020. By the time it solidly settled at the top 1 in the category and has been growing towards top 2 in apps. On March 17 Microsoft teams became #1.

This trend is characteristic of all business apps i.a. Hangouts Meet by Google, Skype for Business, Zoom or Cisco. Zoom Cloud Meetings approached the top 200 in the middle of January but did not grow any further till March. On March 10, Zoom started gaining positions daily and reached #5 in top overall in 11 days. A similar story happened to Cisco Webex Meetings. It is definitely clear that Swedish business has been drifting towards remote processes starting from January.

While all Europe download Disney+, the Swedes use jogging apps
Medical apps definitely became popular and the process was slow but steady. KRY – See a Doctor by Video app drifted from top 100 to top 50 apps at the end of January 2020. From that moment,it did not make any jumps in the ranking till March 18, when the app began to grow fast. In 12 days KRY – See a Doctor by Video reached the top 10 overall in Sweden. A similar growth story happened to Alltid öppet or Doktor.se. Users have been using medical apps more but the App Store does not notice any chaotic run for doctors.

In contrast to the countries which imposed quarantine, starting from January Entertainment apps have been losing positions in Sweden. Being in the top 10 overall apps at the beginning of 2020, Netflix has been losing 15 positions monthly and landed out of the top 40 at the end of March. The only reason for this is sunny spring — restaurants and bars open outdoor terraces and people prefer to spend their free time there.

Other apps from Entertainment are experiencing the same story — HBO Nordic, Duo, SVT Play, TV4 Play (apps from different Swedish TVs) have been losing positions in the top overall chart from February to March.

The Fitness category was influenced rather by seasonal changes, then by the COVID-19 situation. While the apps which help users to train at home (30-day fitness, Lifesum) faced no big changes in January — March, Runkeeper jumped by more than 200 positions and reached the top 20 overall in Sweden. Other apps for running showed the same dynamics — StepsApp Pedometer, Strava or Running Walking Jogging Goals. Swedes enjoy spring, sun, and jogging.

The situation in fitness correlates with the Books category. Storytel: Audiobooks & E-books app gained more than 50 positions and continues its growth in March. People go jogging or a walk and listen to audiobooks. The fact that around 50% of Swedish households are made up of one person only proves it.

Even though all schools in Sweden are open, the Education category was still affected. Google Classroom has been sailing in the second half of the top 100 apps in January — mid-March. However, on March 19 it jumped to #12 in top overall in Sweden. The same story happened to Polyglutt App. On the other side, Duolingo drifted out of the top 5 apps. Most likely many pupils decided to attend classes remotely.

The Houseparty app from the Social Networking category followed the international trend in Sweden as well. It started to grow on March 13 and jumped from being out of top 100 to the top 10 apps. The same happened to Skype or Hangout by Google. Despite the lack of quarantine, many Swedes choose social distancing anyway.

Summing it up, Swedes definitely have a distinct attitude to the COVID-19 situation. Krisinformation.se app (Emergency information from Swedish authorities) is a good outline of this. In January — March, despite the harsh measures in EU countries, the position of Krisinformation.se remained somewhere out of the top 1k apps in Sweden. There had been only one spike in mid-March when it jumped to the top-10 apps for a few days. The app with emergency information from authorities lies far away from top the 10 apps in Sweden. Swedes follow necessary measures but continue their normal life.

What is the difference between App Stores rankings in Sweden and isolated countries?

First of all character of the changes in the App Store differs in their speed. While Swedes were taking precautionary measures starting from January, other EU citizens had to prepare themselves for new reality fast. E.g. in Italy and Spain business apps were gaining >500 positions in a few days — Hangouts Meet, Microsoft Teams, Zoom Cloud Meetings, Cisco Webex Meetings, Skype for Business. E.g. Microsoft Teams in Italy app has always been out of 200 there, however in March in 4 days, it jumped to the top #3 in top overall. 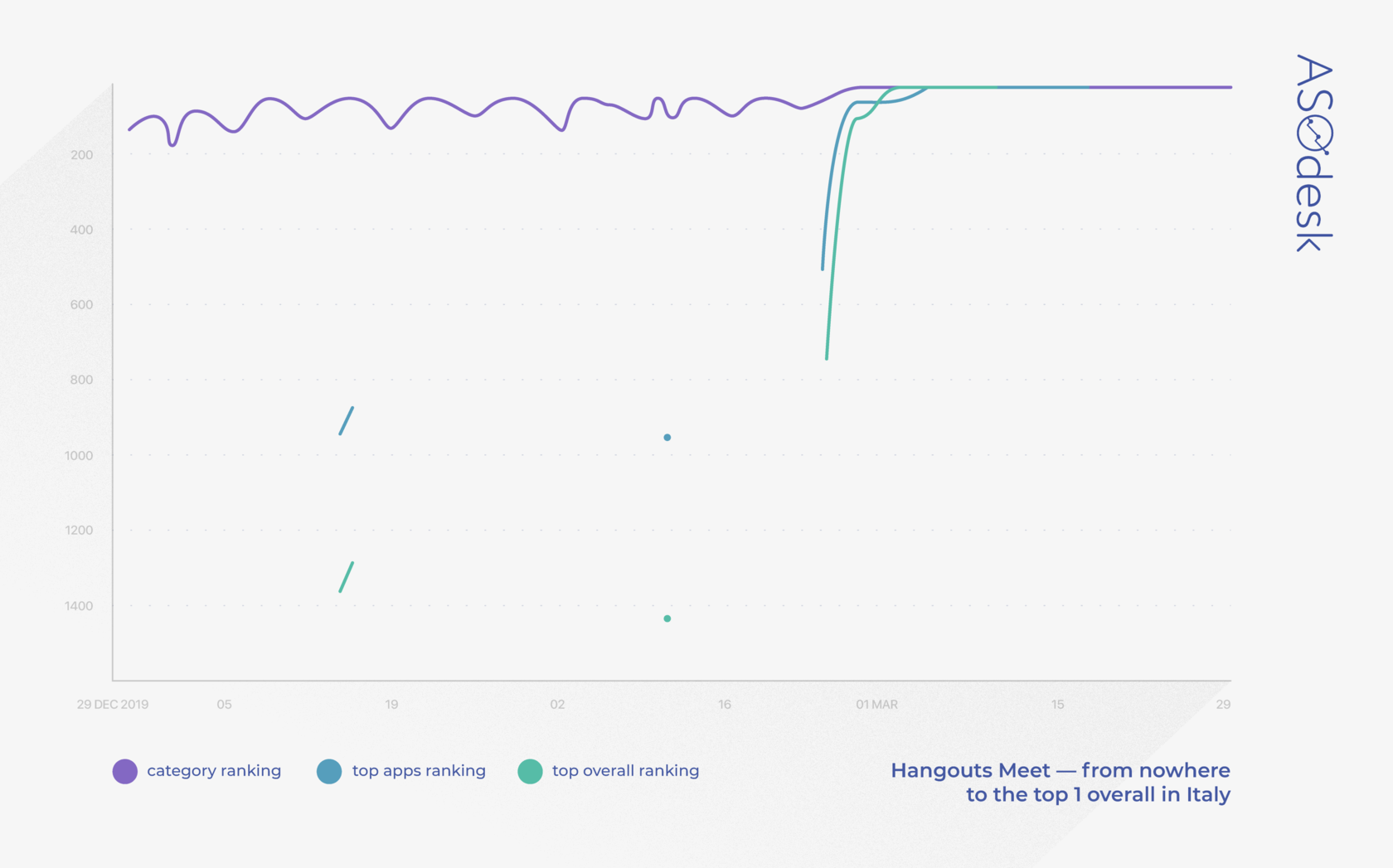 Entertainment apps in Italy and Spain have a different structure than in Sweden. After quarantine started all TV apps in Italy (Now TV, Infinity, RaiPlay, Mediaset Play) and Netflix started to lose positions while PlayStation App, PS4 Remote Play, Xbox almost doubled. Hence people under and out of quarantine use less TV apps.

Another interesting difference is Disney+ app. After the lockdown parents in 7 European countries definitely found a big help in it. Disney+ solidly entered top 5 overall apps in Spain, Italy, UK, Germany, Ireland, Austria and Switzerland. On the contrary — Disney+ is not presented in App Store Sweden rankings at all. 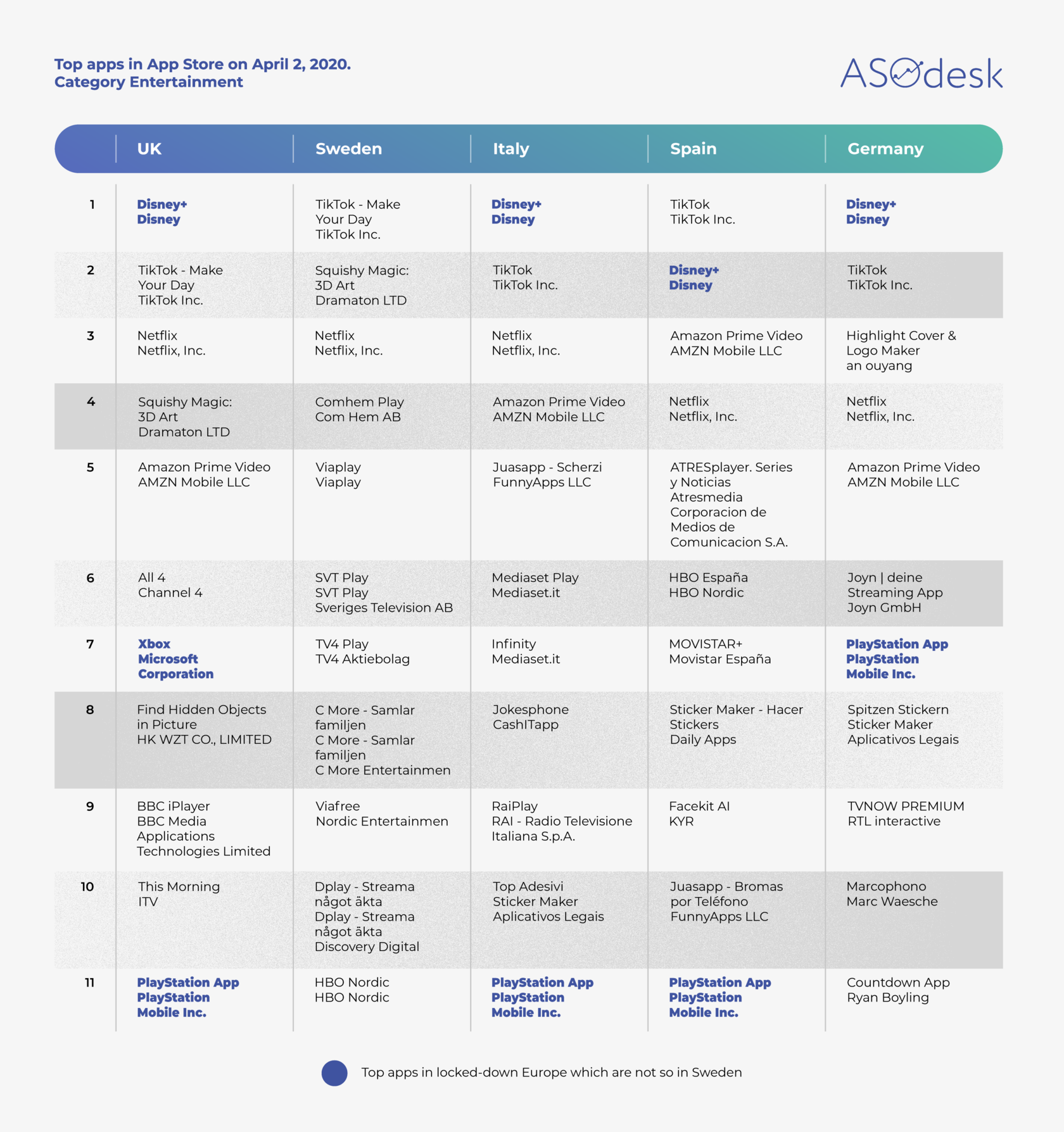 In Spain, Italy and France medical apps experienced a burst of popularity in the beginning of March. This uprising trend lasted for around 2 weeks and then reverted to the previous positions in Store then. Thermo – Family Health Tracker, Pregnancy +, Pic Health Station, Healthylynked and other local pharmacy, receipts, order doctor apps (e.g. Sanità km zero Ricette, LloydsFarmacia) had a similar story.

It seems like at the start of quarantine users actively have been looking for information and support in the medical category. After the first wave of shock, people relaxed and returned to their previous behaviour. It contrasts to the very slow and steady growth of the medical apps in Sweden.

According to the theaso.co calculations, education apps grew up to 140% in quarantined countries. Obviously, the main benefactors have been the apps that allow organizing classes remotely — Google Classroom, WeSchool, Edmondo. The main difference in this change from the App Store is dynamics again. Education apps have been jumping from being out of ranking to the App Store top in a few days. E.g Google Classroom normally being out of top 200 overall in Italy became #3 in 6 days. The same happened in Spain, UK, and France.

An interesting trend happened to the local school apps for receiving and submission of the home tasks, posting student marks and achievements. Apps like Pronote, MonEcoleDirecte in France or DidUP Familia in Italy grew very quickly at the beginning of the quarantine. However, after 2 weeks they lost positions and left the top overall App Store ranking completely. 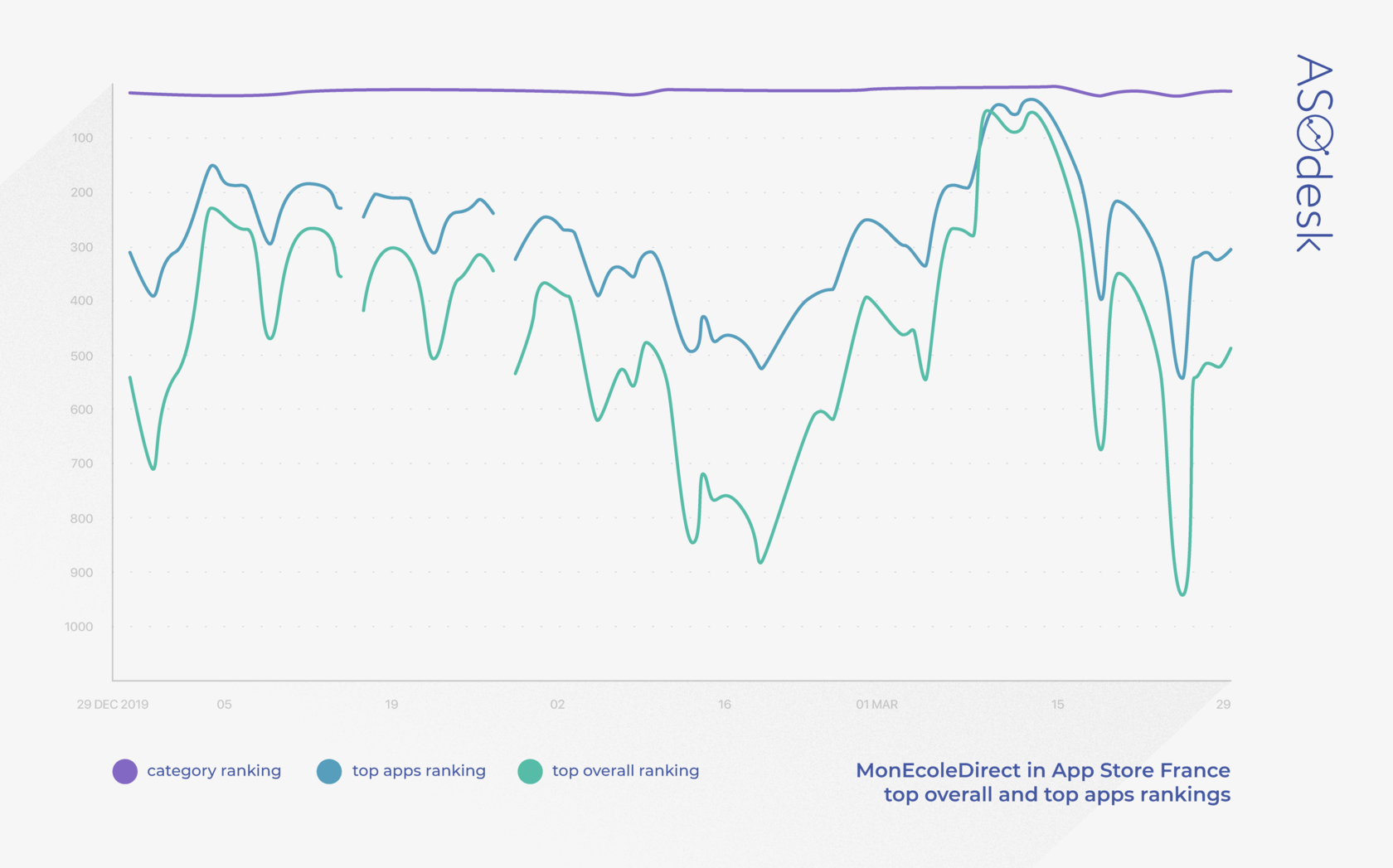 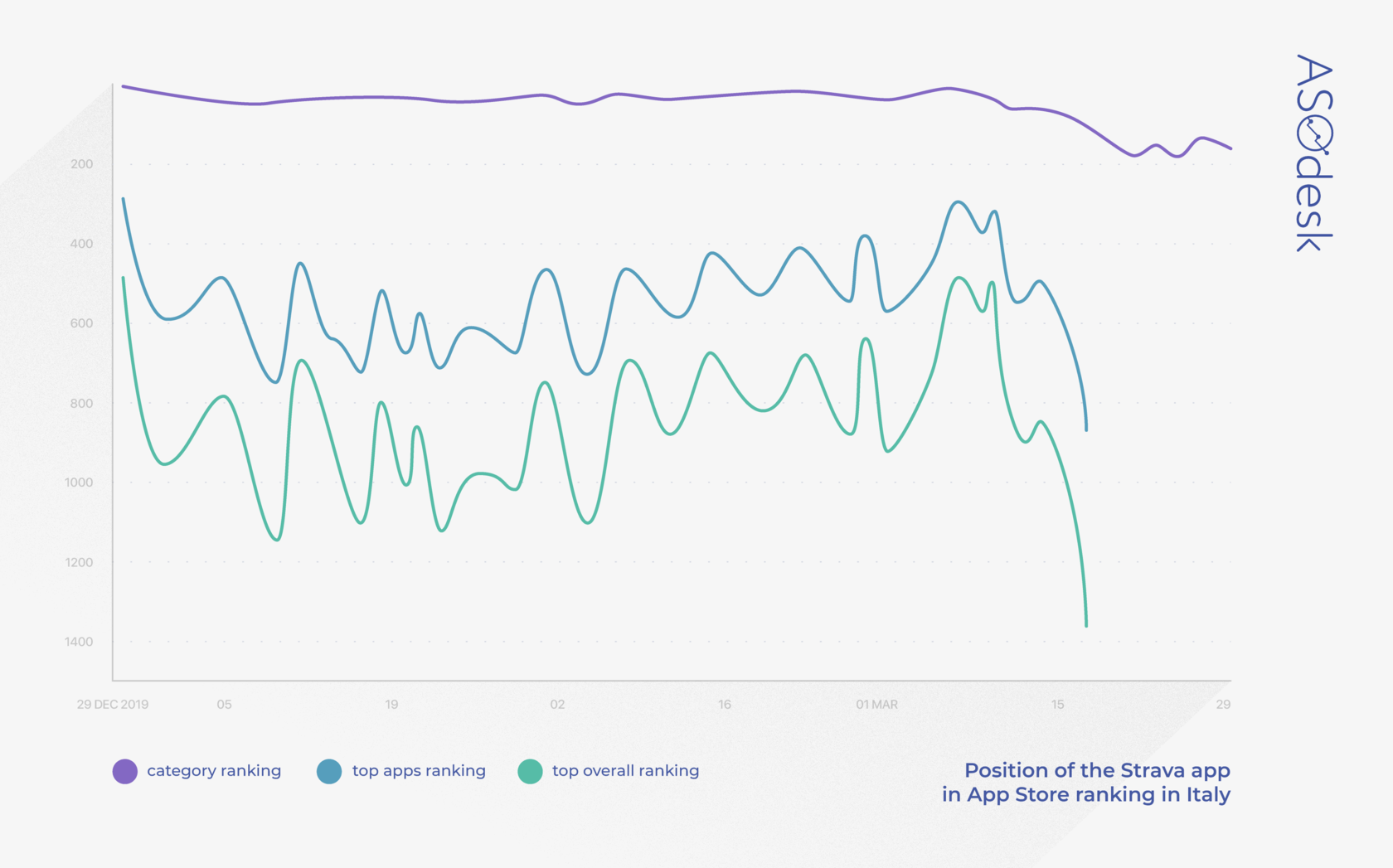 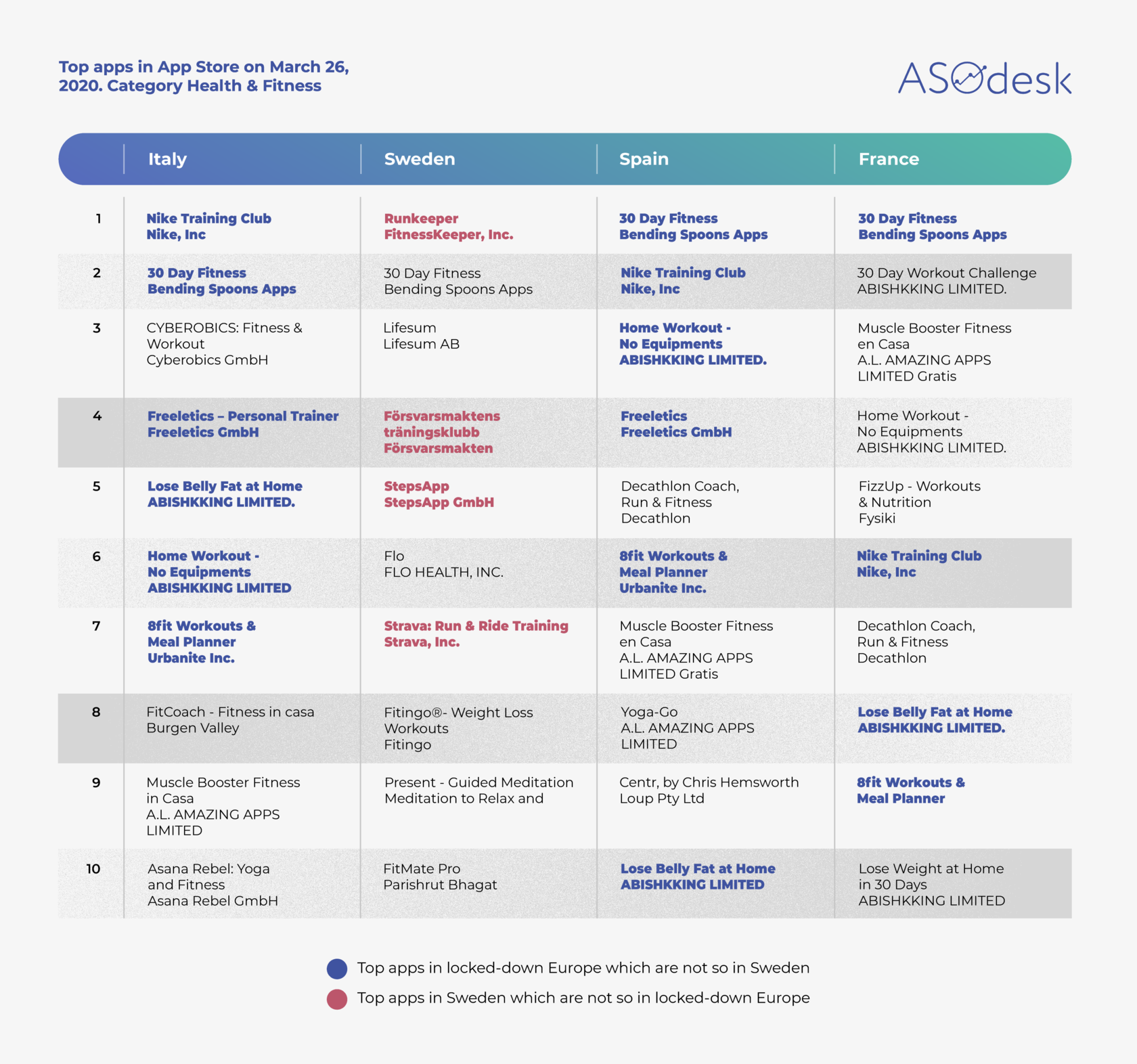 Social & networking apps got one of the biggest increases in organic traffic. Skype for iPhone, Discord, Google Duo, Hangouts, Houseparty, and many other apps doubled their installs. Still, the rapidity of the ranking changes was impressive. E.g. Skype in the UK gained more than 180 positions and became top 12 overall in 9 days. 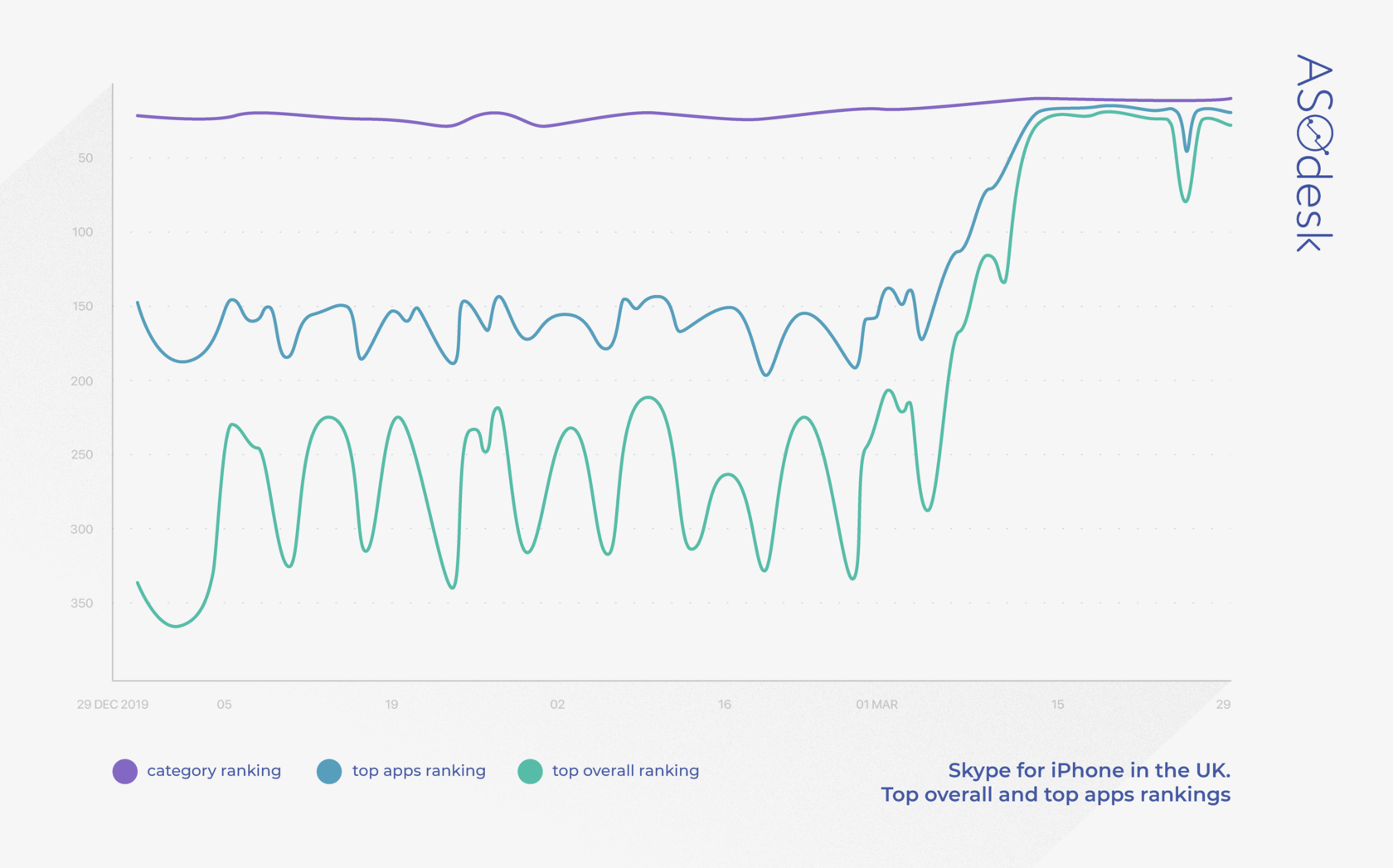 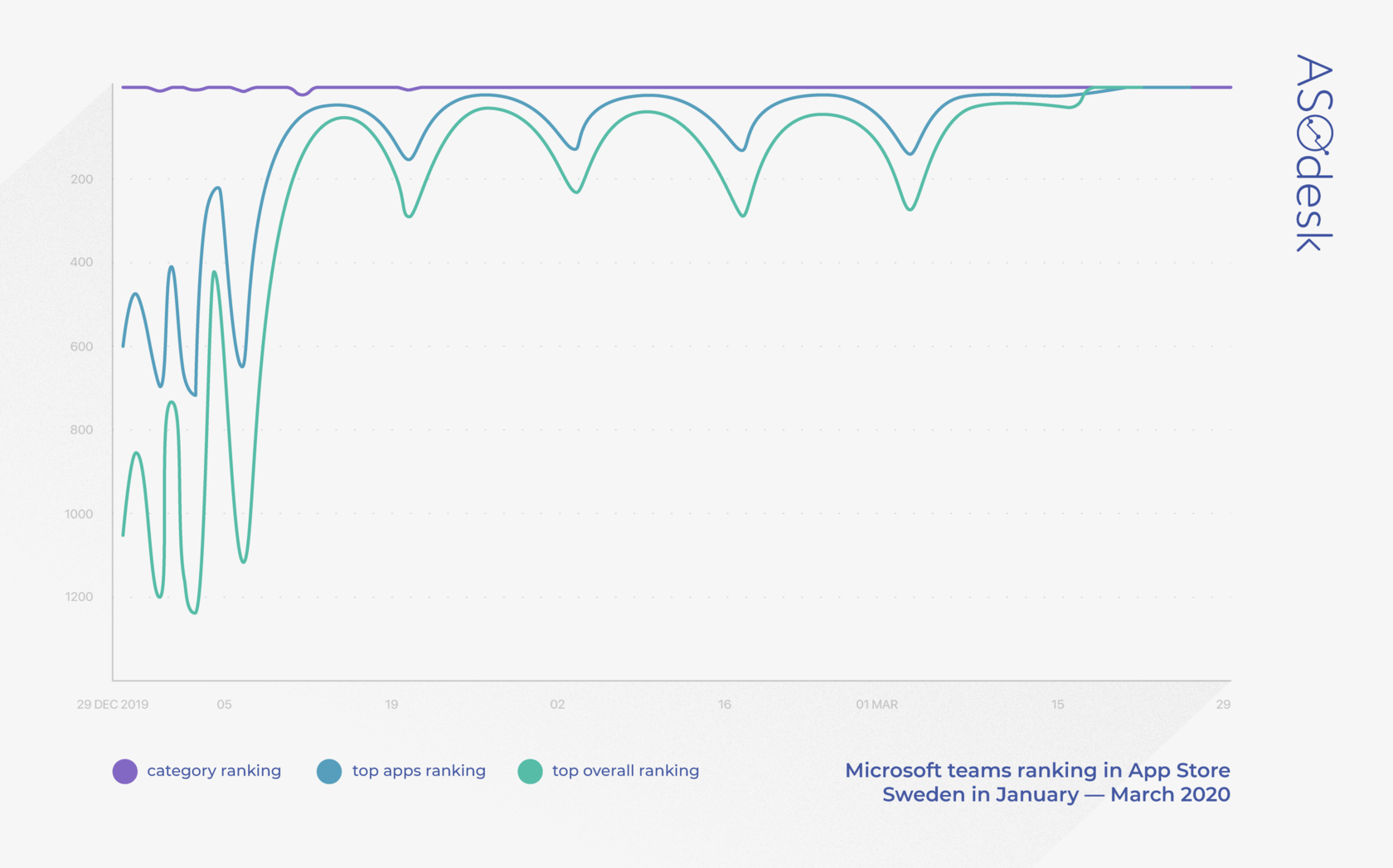